Sintra is a must-see city near Lisbon.  It is in the Sintra mountains north west of Lisbon and is where the Royals summered when there was a ruling monarchy.  (1139-1910 for the monarchy in Portugal, in case you were wondering!)  Up until this day, my travel planning had been stellar.  This is where my lack of attention to detail derailed us.  State- side, I looked up the distance between Lisbon and Sintra, half an hour by car.  Piece o’ pie, I thought to myself.  We can do this in a day.

How about, in an afternoon?  The answer is no!  I have never been much of a morning person.  Ok, let’s be honest, I hate the a.m., and it hates me so, we didn’t usually get out of the gate until 11 at the earliest.  Hey, don’t judge!  This was our first real vacation, and plenty of R and R was part of the plan.

On this day, it was more like noon before we hit the street.  I might have mentioned that we were relying on public transport and it is about an hour to Sintra from Lisbon by train.  Oh, and wait, there is no direct train from Belem to Sintra, so we would have to figure out where to transfer trains.  Mother pus bucket!

It was about 1pm by the time we got there, so we decided to have lunch.  We chose one of the many little cafes in the town center, and the octopus salad was delicious!  Then we thought we would hike up to Pena Palace.  This is a steep hike, and no where in my Google travels did it mention how far the palace is from downtown Sintra.  Ok, I will admit that it did not even occur to me to do a search on it.  I just assumed that Sintra was much smaller than it is.  (Remember that English class about the word assume?  Ass out of you and me, yeah.)   So again, in case you were wondering, it is 18 minutes from Sintra proper to Pena palace BY CAR.  An hour hike on foot almost straight up.  Ugh.  Thankfully, the tuk tuks run up and down near constantly, and an empty one on his way up saw us walking and offered to take us.  Joe answered, no, we can make it.  The tuk-tuk driver said, no, you won’t.  Ok, then we thought he would know.  After hesitating for a nanosecond, we realized that he was probably right and boarded his glorified golf cart.  We were very thankful for the ride when we saw just how steep and far the trek was. 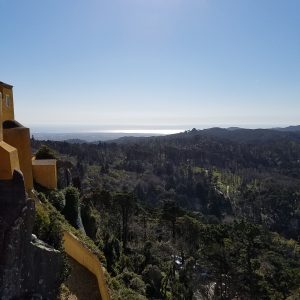 When we finally did reach the palace, we were wowed.  Totally worth the trouble.  This is one of the craziest castles ever built.  It is very Alice in Wonderland-like due to the additions from different periods that were done over the years.  The views are breathtaking from the walkway that goes completely around it.  The décor inside is equally fanciful and fun.  I am just sorry that we didn’t have more time to spend in Sintra.  Next time we will make sure that we do.

After touring the castle inside and out, it was time to make our way back to town.  We did not want to miss the last train back to Lisbon.  We hired another tuk-tuk to take us down the mountain and boarded the train.  The moral of this story is, details, details, the devil is in them.  And never assume anything!  One could easily spend a week in Sintra.  I would suggest at least two days.

I have worked in wine and spirits for over ten years. I am Certified Specialist of Wine and Spirits Educator through the Society of Wine Educators and am certified to teach English as a second language. I live in Porto, Portugal. View all posts by Lisa Graziano CSW, CSE

How we came to be living in Portugal, and our adventures on the Iberian Peninsula.